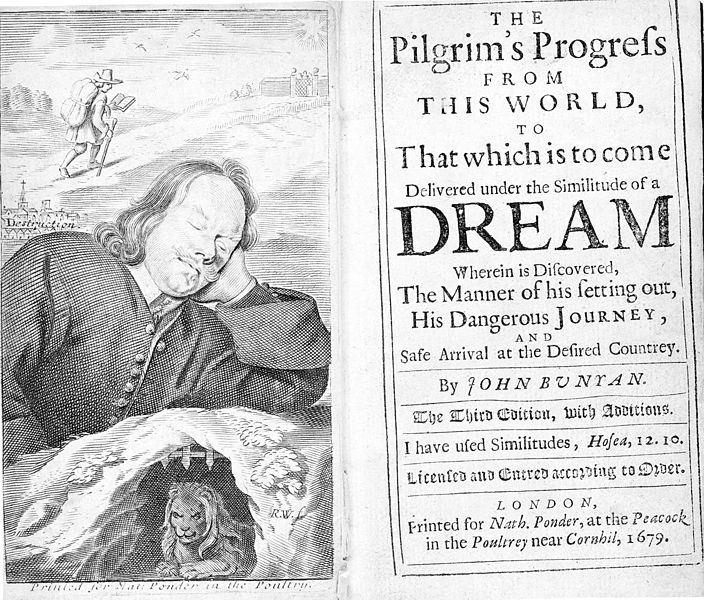 Like symbols, allegories are details that point to something else in a story. However, there are a couple of key differences.

First, allegories are more deliberate than symbols. You can enjoy or make sense of a story without picking up on all the symbols.

In contrast, allegories are designed so the story doesn’t make much sense or come across as entertaining unless you “crack the code.”

As Devin Brown puts it in The Christian World of the Hobbit, “While all the time there is a literal or surface meaning within the story, the author of an allegory is using those surface elements only to point to the “real” meaning outside the story.” (29)

Allegories are designed in such a way that you can’t miss them. The author shapes the story’s tone, descriptions, and other details so you quickly learn what each allegorical element refers to.

For example, you can’t miss what John Bunyan’s saying in The Pilgrim’s Progress. All the characters have names that indicating their role in the story, not proper names like “Jim” or “Jane.” Not only that, but the dialogue is full of direct, didactic quotes like this:

“There are such things to be had which I spoke of, and many more glories besides. If you believe not me, read here in this book, and for the truth of what is expressed therein, behold all is confirmed by the blood of Him that made it.” (5)

This isn’t dialogue meant purely for entertainment. This is dialogue designed to make a point. As Leland Ryken said in Jesus The Hero, an allegory’s goal is to tell a story that is “heavily didactic (having the intention to teach).” (104)

Second, allegories tend to have a smaller focus than symbols. Symbols in a story don’t necessarily need to have moral truths behind them. The fact that in The Phantom of the Opera the Phantom is symbolically Hades doesn’t give any kind of moral lesson. It just enhances the story.

In contrast, allegories always have lessons that the author believes are important.

John Bunyan’s The Pilgrim’s Progress focuses on how to become spiritually mature.

The struggle with allegory is that since the audience needs to know the point being made, this creates certain limits. There’s not much room for including details just to make a scene happier or interesting. After all, the audience may think those details have hidden meanings you never intended.

This is why Devin Brown wrote, “In allegories, the surface or literal story is not particularly compelling, nor does it need to be since it is not the author’s focus. The story in an allegory is simply a means of illustrating something else.” (31)

These limits explain why everyone seems to use the same two examples when talking about allegories: John Bunyan’s The Pilgrim’s Progress and Edmund Spenser’s The Faerie Queen.

But writing a good allegories takes some unusual skills. Thus, the genre tends to be rather small.

At least, that’s true for full-fledged allegories, stories where the entire story is built around making a point.

There is another option.